10 Plants That Cause Rashes: How to Identify, Avoid and Treat Them 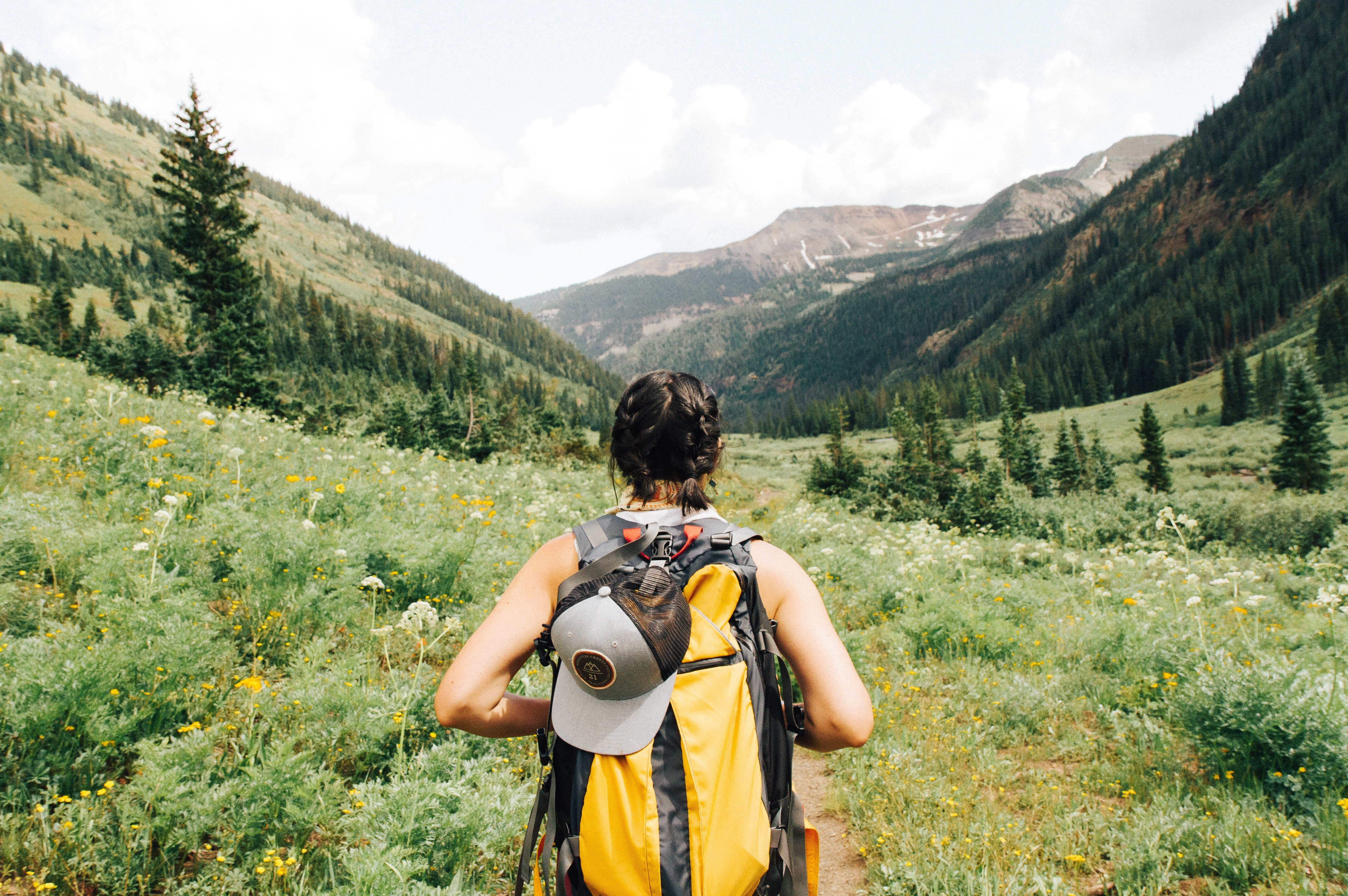 Being out in the greenery is rejuvenating, but a relaxing stroll can become a pain if you get too cozy with the bushes. If you develop rash or blisters soon after a walk, don’t be too quick to blame it on the bugs!

Many harmless-looking plants in the wild can cause skin irritation in humans. People may react differently to the toxins in these plants, and you can get anywhere from insignificant rashes to horrendous blisters depending on your susceptibility.

When you accidentally brush against the leaves or stems of a poisonous plant, you can get contact dermatitis, which looks like a rash that may be short-lived or may require emergency medical attention.

To help you avoid this unpleasantness, let’s have a look at some common toxic plants, what they look like, how you can identify them, and where you may encounter them. 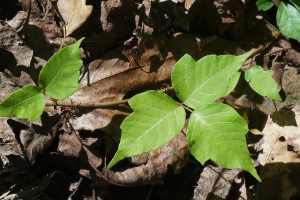 Poison ivy is easily identifiable by its trademark trifoliate leaves that sprout in clusters of three at the same spot on the stem. You can also pinpoint it by its fruits that grow in bunches of greenish-white drupes. Typically poison ivy grows as a vine along roadsides and on trees, and it also trails as ground cover.

Skin Irritations: Poison ivy’s sap contains the toxin urushiol oil, which irritates the skin on contact. Red and itchy blisters can form days or even weeks after your first exposure. Contrary to popular belief, poison ivy rashes are non-contagious and only form where the skin came into contact with the urushiol oil.

Commonly Found In: You can find poison ivy throughout the continental US except for the West Coast, where its occurrence is rare. It grows as a woody shrub in the north, while in the south, midwest, and on the East Coast, poison ivy grows on a vine. 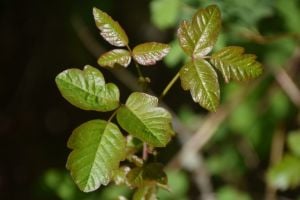 Poison oak’s deep green leaves resemble those of the English oak even though both plants are unrelated otherwise. Poison oak’s leaves are hairy and grow in clusters of three like poison ivy.

It has firm stalks, and the plant bears yellow flowers and fuzzy greenish-white berries. You may come across poison oak vines or shrubs while trekking in the forest or traversing dry sandy fields.

Skin Irritations: Since poison oak sap also contains urushiol oil–you can get rashes by touching any part of the plant. Similar to poison ivy, the rashes are itchy and red. The severity of the blisters depends on the allergic reaction of your body.

Commonly Found In: You will encounter poison oak most often on the West Coast compared to the eastern states. However, it’s rarely seen in the midwestern states. 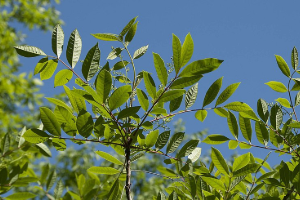 Poison sumac grows as a small tree or a tall shrub and can achieve a height of 6-30 feet. Red stems branch off the main trunk and have compound leaves with 7-13 leaflets, oblong in shape with smooth edges. You can also identify it by its greenish-yellow flowers and gray berries, distinguishing it from seemingly similar but harmless plants.

Skin Irritations: Notorious as the most toxic plant of North America, poison sumac has urushiol oil in higher concentrations than poison ivy and poison oak. The allergic reaction to poison sumac can be much more intense with painful swelling and eruptions. Inhaling poison sumac smoke can be life-threatening because it can cause pulmonary edema.

Commonly Found In: Poison sumac favors Florida’s wetlands and swampy areas abundant in the southeastern states. You may also encounter it in the woody parts of the northern states along streams and ponds. Although it’s found across the US, it isn’t as common as poison ivy and poison oak. 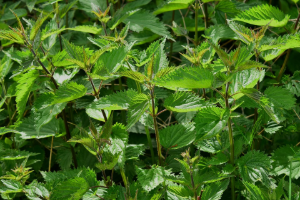 Stinging nettle is the most common member of the nettle family. It grows in dense patches, but an individual plant can be 6-8 feet tall. It’s a single stalk plant with a few green or purple stems branching off it.

The leaves sprout parallel to each other in pairs. They are dark green and oblong, typically 2-4 inches long with tapering tips. Stinging hairs cover the entire plant and its foliage. You can also find white flower clusters at the base of each pair of leaves.

Stinging nettle is edible, and its preparations are famous for medicinal benefits against eczema, joint pain, arthritis, gout, and anemia.

Skin Irritations: As the name suggests, a sharp stinging pain occurs upon contact with the plant. The burning sensation is because its hairs inject a blend of histamine, serotonin, acetylcholine, and formic acid into the skin. You may experience a reddish swelling and localized numbness, and itching as well. The reaction can last from several hours to a day before it subsides on its own.

Commonly Found In: A native of Europe and Asia, stinging nettle can be found all across North America in damp woodlands, along streams, rivers, and hiking trails. You can also find them along the farmlands and in ditches. 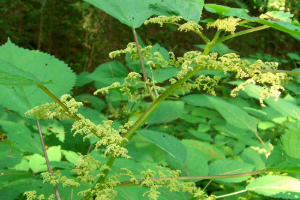 Both stinging and non-stinging hairs cover the branches and the underside of the leaves. In summer, the wood nettle is laced with white flowers.

Wood nettles are edible when cooked. They also provide cover for animals, and some insects like butterfly caterpillars use them as hosts.

Skin Irritations: The wood nettle’s stinging hairs cause a painful burning sensation that can subside within an hour with proper care. If rashes and blisters form, they can take several days to subside.

Commonly Found In: Wood nettle is a herbaceous plant native to eastern and central North America. They usually grow in moist places along the streams and rivers in open woods. 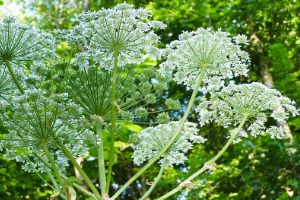 As the name suggests, the giant hogweed can be as tall as 14 feet with hollow stems 2-4 inches in diameter. The stems are green with purple spots, deep ridges, and white hairs. They have large, compound leaves five feet wide with deep lobes.

Apart from its size, you can identify this toxic plant by its giant clusters of flowerheads, which resemble Queen Anne’s lace. The flowers themselves are small, white, and umbrella-shaped.

Skin Irritations: The giant hogweed sap is phototoxic, i.e., it needs the sun’s ultraviolet rays to activate and cause a reaction. Upon contact, painful blisters can form similar to second-degree burns that may result in permanent scarring.

With humidity and sunlight, it can cause severe skin and eye irritation, temporary eyesight loss, and in rare cases, permanent blindness. 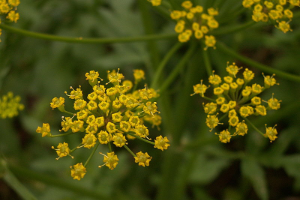 Wild parsnips are 2-5 feet tall plants. They have hollow stems that have deep grooves and large celery-like compound leaves. Leaves can be up to 18 inches long and can have 3-15 leaflets. They are yellowish-green in color, coarsely toothed, and hairless like the stems. The plant bears yellow flowers in clusters 3-8 inches apart that resemble Queen Anne’s lace.

Skin Irritations: Wild parsnip sap contains furocoumarins that make skin sensitive to sunlight. These chemicals trigger a photosensitive reaction in the skin, which can cause burn-like blisters.

Commonly Found In: It’s a non-native, highly invasive weed that can grow in a broad range of habitats. It spreads along transportation routes and also frequents pastures and fields. You’re more likely to encounter it in the northern and eastern states, especially in New York. 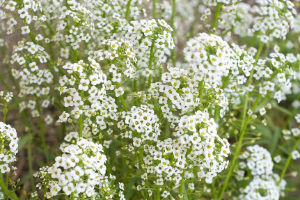 Remember the clusters of delicate white or pink flowers decorated in your roses? They’re baby’s breath. The plant looks like a small bush with lance-shaped opposite leaves that can be smooth or hairy. In full bloom, flower clusters cover the plant and give it a dome-shaped appearance.

Skin Irritations: When alive and fresh, the plant doesn’t irritate the skin. However, once it has dried, it can cause an allergic reaction in the eyes, nose, and sinuses.

It can also trigger and exacerbate asthma, especially for people who handle it frequently, such as those in the floral industry. It can also irritate the skin, but these reactions are typically mild and resolve quickly.

Commonly Found In: It’s widely spread throughout North America but is more common in the North and the West Coast. You can find it growing in fields, on roadsides, beaches, and sandy areas. 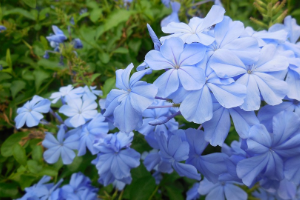 Also known as cape plumbago and sky flower, leadwort is famous for its spectacular powdery blue colored flowers that turn scarlet in winter. They look stunning against its brilliant green foliage.

The plant can grow up to 6-12 inches and boasts glossy green leaves that take a reddish tint as winter approaches. It blooms into medium-blue or whitish flowers with five petals that are 3-4 inches in diameter. They make a pleasant sight and are often grown as ground cover in gardens.

Skin Irritations: As beautiful as it looks, handling leadwort with bare hands can irritate the skin, forming red patches and blisters.

Commonly Found In: It is purposely grown for ground cover in gardens all over the US. It grows in the form of a vane, hanging down the fences and along the borders. 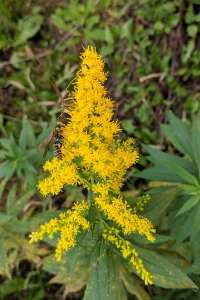 Ragweed is identifiable by its distinct leaves and flowers. The plant grows upright and can get as tall as six feet. Its leaves are green and hairy and have fine lobes that give them a delicate, feathery appearance. The flowers grow in clusters on spikes that shoot out from the top of the plant. They are yellow and look like a fountain around the tips.

Skin Irritations: Ragweed may develop an itchy rash if its pollen is touched directly, but mostly it’s notorious for causing hay fever or allergic rhinitis in the fall when its pollen disperses in the air.

Commonly Found In: You can encounter ragweed all across the US except Alaska. It’s most common in the eastern states from Washington DC to Rhode Island. It mainly thrives in the midwest and northeast that report most cases of ragweed allergies. 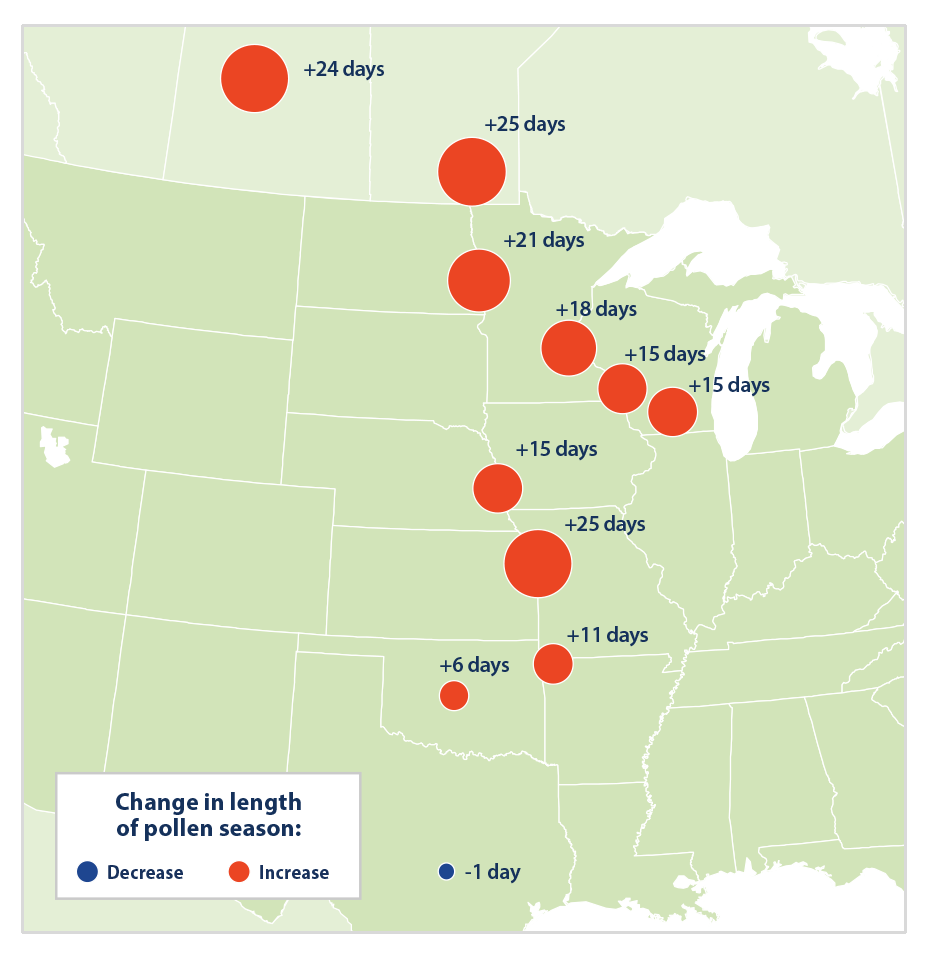 How to Treat Plant-Induced Skin Rashes

If you or someone you know comes in contact with a poisonous plant, make sure not to touch or rub the surface. Here’s what you can do to manage the symptoms of the allergic reaction.

Protect From the Sun
The rashes become more itchy and irritating when the body or skin temperature rises. Some toxins also require ultraviolet radiations to activate the allergic reaction, so it’s better to avoid sunlight exposure as soon as you come in contact with a poisonous plant.

Rinse Thoroughly
Rinse the area thoroughly to remove as much poison as possible. You can wash with rubbing alcohol, dishwashing soap, or detergents. Wash it frequently to prevent oils from spreading and keeping the area cool and clean.

Remove Fine Hairs
You may notice small hairs sticking in the skin in the case of exposure to stinging nettle or wood nettle. If so, apply duct tape or hair-removing wax on the affected area. Then remove it to remove any hair still lodged into the skin.

Apply Cold Compresses and OTC Lotions
Keeping the affected area cold keeps itching and irritation to a minimum. You can use oatmeal packs or oatmeal baths to keep the skin cool. Calamine lotion or hydrocortisone cream application can also reduce blisters and reddish swellings.

Note: Do not apply on broken skin and open blisters.

Take Over-the-Counter Antihistamine
You can take OTC antihistamines like Benadryl to slow down the allergic reaction. However, it can make you feel drowsy, so take it at night or when you don’t need to remain alert.

If there’s considerable itching or the rashes and blisters appear widespread, the physician may prescribe antihistamines or oral corticosteroids. If the person becomes unconscious or has difficulty breathing, call 911 immediately as he/she may be experiencing a life-threatening allergic reaction. Similarly, if you had a severe reaction to exposure in the past, it’s better to head over to the emergency room right away.

Now that you know what plants to avoid and what you should do if you do happen to contact them, you will be prepared for anything your skin might face!