Anyone who flips through tv channels will admit to get drawn into a mesmerizing beauty infomercial with dramatic before and after images, and one ad on constant rotation with striking results is for Crépe Erase. This cream is promoted by actresses Jane Seymour and Courtney Thorne-Smith and promises to make skin smoother, firmer and more hydrated. But what exactly is Crépe Erase, and does it work? But first, what is crepey skin?

Is Crépe Erase Worth The Money?

A common question about this brand is if the products are worth the cost.

In our opinion, Crépe Erase products are worth the money, but there are other brands that deliver greater value.

One brand is Carrot & Stick, a clean skincare brand that perfectly balances the gentle nurturing of plants with the powerful results of innovative science.

Carrot & Stick intro bundles deliver great value for money because you can bundle 3 full-size products worth up to  for $88.

What Is Crepey Skin?

Crépe Erase targets crepey skin, which isn’t exactly the same thing as a wrinkle. Crepey skin is named for its namesake crepe paper, which is dry, tissue thin and crinkly. Crepey skin shows up on the arms, chest, knees and back of hands, where the skin looks fragile and saggy. In scientific terms, it represents the thinning of the dermis and epidermis. Anyone can get crepey skin but those with fair skin are more susceptible to it.

One of the main causes of crepey skin is sun damage, as damaging rays from the sun break down the elastin in the skin. Elastin is what gives skin its ability to “bounce back” and look firm. As collagen and elastin deteriorate over time, the creases on skin become more prominent and skin starts to look saggy. Damage is often cumulative and develops over months and years.

Crépe Erase is a body cream that promises to improve the signs of crepey skin. The infomercials show dramatic before and after photos, where skin that formerly looked as creased as an accordion becomes smooth and soft. As the company explains, the cream is meant to be used “under the chin” so can be applied to the body where crepey skin is evident, such as arms, thighs and knees.

The cream is just one part of the process. The company sells two different skincare systems – a basic two piece regimen and a more comprehensive five piece kit- that are designed to exfoliate the skin to prepare it for treatment. Think of it as a two pronged approach to crepey skin – exfoliation reveals smoother looking skin and which is followed up by intense hydration.

The powerhouse ingredient in Crépe Erase is TruFirm, which the company says is a proprietary blend of plant derived extracts sourced from apple, dill and sage. In its infomercials, Crépe Erase says it works by “targeting the dermal enzymes that break down collagen and helps promote healthy elastin, so that skin looks smoother and softer.”

What Does Crépe Erase Sell?

The Crépe Erase company sells its signature product, known as Crépe Erase Advanced Body Treatment, along with other items. Here’s a closer look.

The Restorative Facial Treatment is specifically designed for the face and contains hydrating ingredients like Shea Butter and Cocoa Butter. It also contains TruFirm, which they claim supports skin’s natural elastin production. The product contains Tocopheryl Acetate, which is a type of Vitamin E. The texture is rich and it is suitable for normal to dry skin.

The Body Smoothing Pre-Treatment is an exfoliator that is meant to be applied in the shower or the bath, and contains TruFirm complex along with alpha hydroxy and beta hydroxy acids, which are naturally derived from foods and plants. The exfoliator also contains salicylic acid, which comes from willowbark. These acids work by dissolving dead skin cells to reveal smoother skin with improved texture.

Other Crépe Erase products are meant to treat specific body areas, such as the Anti-Aging Hand Repair Treatment. The cream also contains TruFirm Complex along with hydrating ingredients such as shea butter, and squalene, an oil which is harvested from olives, rice bran or sugar cane. Dimethicone, a silicone, as well as dill oil extract and coconut alkanes, derived from coconut oil, round out the ingredient list.

The Flaw Fix Eye Cream can be applied twice a day and is meant to soften the look of fine lines and crow’s feet in the eye area, along with reducing under eye puffiness. The cream contains apple and dill extract, as well as dimethicone.

ALTERNATIVES:  If you are concerned about aging and crepey skin around the eyes, one product we recommend is Carrot & Stick The Eye Cream.

Four In One Eye Renewal Capsules

The Four In One Eye Renewal Capsules are serum-filled ampoules that can be applied to the eye area once a day. The serum is meant to tackle fine lines and crow’s feet thanks to grape oil extract and caprylic/capric triglycerides which are derived from coconut oil and glycerin.

What Ingredients Are In Crépe Erase?

According to the company, the power house ingredient in Crépe Erase is TruFirm, which is formulated with phytonutrients, which are derived from plants. The formula includes extracts of apple, dill and sage which are thought to support elastin and the skin’s resilience, resulting in firmer, smoother looking skin. Apple is thought to support the skin’s structure while dill oil is meant to promote elastin production. Sage is believed to target the signs of aging.

Other key ingredients in Crépe Erase products are known to be potent—but common- moisturizers such as coconut oil, olive oil and shea butter. Some of the products contain dimethicone, a type of silicone that feels like silk on the skin, and glycerin, a humectant.

As Elle, our in house biochemist and skincare specialist discussed, it is hard to determine if Crépe Erase is beneficial for reducing the appearance of thinned skin as we don’t know what is in the TruFirm complex.

A look at the ingredients list shows a hydrating formulation with some key plant-based extracts.

As far as the research goes, there are only a few ingredients that will help with thinning skin, the main one is retinoids. Retinoids work by thickening the skin and helping to support your skin’s natural production of collagen. Retinoids are not a key ingredient in the Crépe Erase.

The other way to minimise the appearance of thinning skin is through hydration. This is where the Crépe Erase product focuses. Crépe Erase includes a number of heavy oils, silicones and glycerine which help to add oil and water-based moisture into the skin.

Some people will enjoy the oil-based formulation of the Crépe Erase but it may not be for everyone, as the reviews suggest.

How Much Do Crépe Erase Products Cost?

Crépe Erase products are only sold as part of a kit when purchased directly from the company but are sold individually on Amazon, Ulta and QVC.

The Advanced 2 Step Essentials Kit contains the Body Smoothing Pre-Treatment along with the Crépe Erase Advanced Body Treatment for $39.95.

The Five Piece system sells for $59.95 and contains all of the items including The Body Smoothing Pre-Treatment, the Anti-Aging Hand Repair Treatment, the Overnight Facial Plumping Treatment and The Flaw Fix Eye Cream.

Crépe Erase calls itself “the #1 anti-aging body treatment system for dry, crepey skin” which the company says is based on their own sales along with NRI and NPD sales data for 2017. The company says that the product is “clinically shown to improve the look of dry, crépey skin on the body.

“ The Crépe Erase website lists statistics from “a 54-person evaluation by an expert clinical grader measuring décolleté, knees, and arms” and concluded that 80% of women saw an instant reduction in the look of crepey skin on the body after one use; 86% of women saw a visible improvement in skin tone on the body in four weeks and 91% of women saw a lifted appearance of the skin after 8 weeks.

The company also highlights testimony from its celebrity spokespeople. Actress Jane Seymour says, “Ever since I have used Crépe Erase, I just have so much more confidence in my body and certainly in my skin. I am really embracing 67. You can be fearless in your 60s.” Former Olympic figure skater Dorothy Hamill, 62, another spokesperson, says “The new Crépe Erase is so luxurious, and it absorbs even faster, and my skin stays hydrated even longer …it really works and that’s why I use it every day, all day long.”

On Amazon, Crépe Erase Advanced Body System has 357 customer reviews, and an average of 3.5 stars. Forty-three percent of reviewers give it 5 stars with feedback such as “Crêpe Erase is probably the best skin-care line I have ever come across — and I’ve pretty much tried them all.” Another reviewer writes, “This product is amazing. I had some severe sun damage and had deep wrinkles on my upper chest. This product has smoothed out the wrinkles. Will buy it again!!!”

The reviewers who were not happy with the product had similar complaints. Many said that the product simply didn’t work or that it felt too rich. Twenty percent of reviewers gave it a one star rating. “I’ve been using it for over three months and see no difference. The product is greasy and leaves residue on clothing too. I would not recommend it…”

Amazon sells all of the Crépe Erase products individually and each gets a 3-4 star rating. The Exfoliating Body Polish gets a solid 4 star rating, based on 99 reviews.

Allure magazine reviewed Crépe Erase in 2015, when multiple staff members tried out the body cream. Their consensus was the cream was deeply hydrating but could be too hydrating as it had a tendency to feel greasy and slimy. Staffers raved that it was great on their cuticles but made one reviewer stick to their sheets at night.

The bottom line? Crépe Erase is a deeply hydrating cream which can be helpful for seriously parched skin. It may help severely dehydrated skin look smoother thanks to a heavy dose of oils but it doesn’t “erase” lines.

Where Can I Buy Crépe Erase?

Crépe Erase is sold on the company website and is also found on Ulta.com and Amazon as well as QVC.

The company says it offers a 60 day money back guarantee.

What Are Some Alternatives to The Ordinary Skincare? 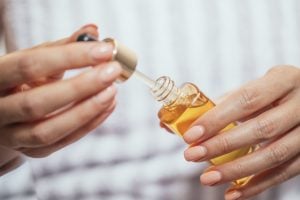