We’ve all done it. It’s late at night, you’re flipping through tv channels and you see a commercial for a seemingly miraculous product. As you watch the transformations unfold, it seems almost too good to be true. Frizzy, dry hair is transformed into sleek, shiny waves with the right shampoo, and acne covered skin looks flawless thanks to a new foundation that provides coverage without being too heavy. You may have also seen the dramatic looking results from Plexaderm, a product that claims to banish under eye bags and wrinkles (albeit temporarily).

What are the Best Skin Care Products of 2019?

Plexaderm’s official name is Plexaderm Rapid Reduction Cream PLUS. It is meant to reduce the appearance of under eye bags and wrinkles for several hours. The cream should be applied to clean, dry skin. The product comes in a pump, and only a tiny amount should be applied; start off with an amount that is half the size of a pea. Using a light tapping motion, apply a thin layer of the cream. Allow Plexaderm to “set” and dry for approximately 10 minutes. If you will be applying makeup over the Plexaderm, allow an additional 10 minutes for the product to fully dry. Moisturizer should be used 15 minutes after Plexaderm has been applied. The company also suggests using a blow dryer on a very low setting to help accelerate the drying process if you’re in a hurry. 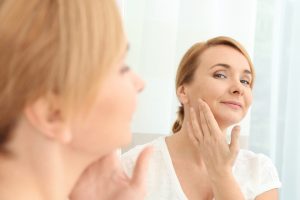 What Are the Ingredients in Plexaderm?

The key ingredients are the sodium silicate and the magnesium aluminum silicate- in layman’s terms, these are silicate minerals derived from shale clay.

Sodium silicate is primarily used in the manufacturing of soaps and detergents, and helps to balance the pH levels of a product. It’s found in skin care, hair color, shaving products, bath items as well as makeup. Sodium silicate also has industrial uses. It is a corrosion inhibitor and can be found in cement.

Magnesium aluminum silicate is commonly known as purified clay. It can help to absorb excess facial oil and is also used as a thickener.

The other ingredients include dyes, and cellulose gum, a thickener that also helps to create a film on the skin. Acetyl hexapeptide-8 is a synthetically derived peptide used in a wide range of skincare and makeup products and has water binding properties. Phenoxyethanol is found in green tea but is often created in a laboratory, and helps to fight bacteria and also works as a preservative. Ethylhexylglycerin works as a skin conditioning agent as well as a preservative.

How Does Plexaderm Work?

To understand how Plexaderm works, you have to look at the two key ingredients- sodium silicate and magnesium aluminum silicate.

Sodium silicate works as an adhesive. Another way to think about is that it’s like tape on your skin. It glides onto the skin in a liquid or gel form and when it dries, a thin film forms which causes a light contraction or pulling of the skin. When applied to under eye bags and wrinkles, it can cause a temporary tightening effect and the skin appears more taut. It is also thought to have a lifting effect on skin once it is fully dried.

Magnesium aluminum silicate works in conjunction with the sodium silicate. While sodium silicate “pulls” and tightens the wrinkle or the under eye bag, magnesium aluminum silicate works by filling in the wrinkle and helping to it look plumped up and even. When combined, the idea is that the ingredients work to pull, tighten and fill in the skin to give it a youthful look. While this is true in theory, keep in mind that any tightening and smoothing effect gained from these ingredients will only be temporary.

These two ingredients are also found in other skincare products promising a temporary lift and deflating of under eye bags, such as Gone In Sixty Seconds, Line Free Lift by Genesis Solutions and InstantFx Rapid Wrinkle Eraser. They are also in natural beauty products such as Instant Wrinkle Eraser serum.

Are There Any Side Effects?

Any product has the potential to cause irritation in the skin; always do a patch test first. One common complaint from Plexaderm reviewers is that the cream leaves a white residue. Although no one said it was harmful, it was more of an annoyance.

When you look at the infomercials for Plexaderm, the results look dramatic. Puffy under eye bags seems to disappear and fine lines and crow’s feet seem to vanish. It seems like surgery in a bottle. According to the brand’s own clinical study of 40 people, conducted in 2017, 75% saw a decrease in the appearance of under eye bags, and 78% saw a decrease in under eye dark circles. The customer reviews are overwhelmingly glowing, with users giving it 4.4 out of 5 stars. Customer feedback ranges from “Really works. Just wish it came in different shades,” to “It rids these brutal bags under my eyes .I have travel bags, I don’t need them under my eyes.” Some people say the product has become one of their staples; “Omg.. my eyes look great. I couldn’t be more happy!! What a fabulous product. I workout live without it!!”

But take a closer look at reviews on Amazon and you’ll see that as with many products, the reviews are mixed. Plexaderm currently has a 2.5 star rating on Amazon from 634 customer reviews. 54% of the reviewers give it a 1 star rating while only 20% give it a 5 star review.

Many reviewers say they were drawn to the product after seeing the dramatic infomercials. The positive reviews claim that the product reduced their puffy eye bags and eye wrinkles, and some people raved that Plexaderm took 10-20 years off their face. These fans don’t just like it- they love it. “I have had large bags under my eyes for over 30 years, about 3-4 minutes after I used it for the first time I couldn’t believe how great it worked! Almost completely gone! Incredible! If I hadn’t used it myself I would not believe it worked so incredible!,” writes one reviewer.

But the vast majority of the reviews say that the product did not work at all, or if it did work, the results lasted anywhere from two minutes to two to three hours. As one reviewer wrote, “I was so excited to try this product. I had heard good results. It did work for about 2 minutes. Then my underbags returned. Bummer. I was hopeful.” Many users expressed disappointment. “I should’ve read these reviews first. My complaints are exactly the same as everyone else’s. On the infomercial they said you could use moisturizer afterward, but you can’t. I would have done just as well if I bought some Elmer’s Glue and applied it to my skin. And it would have been a lot cheaper. I should’ve known it was too good to be true.”

Some users said in order to maintain that tightening look, you cannot move your eyes or your face. Many customers complained that the product left a white residue on their eyes, while others said it caused irritation and stinging. There are also many complaints about the dispenser clogging, and it can be difficult to put makeup on the skin after the film is in place.

Based on the Amazon reviews, it seems that the vast majority of people using Plexaderm were disappointed with the product. But when it comes to evaluating whether or not a product “works,” keep in mind that what works for one person and their skin type may not work for someone else. Factors such as oily skin and sweating can also reduce the effectiveness of a product such as Plexaderm. That’s why when it comes to find the right skincare regimen for yourself, there is always a bit of trial and error before finding what works for you.

Where to Buy Plexaderm

Plexaderm is not available in brick and mortar stores. The product is advertised on television and is mostly sold through the company’s website as well as sites such as Amazon and eBay. Always check that a seller is an authorized distributor before purchasing any cosmetic from a third party site.

The price of Plexaderm can vary, depending on the offer. One bottle is currently being sold for $59.95 while three bottles is priced at $119.90. The company also sells additional products, including Pure Hyaluronic Moisturizer, Collagen Peptide Firming Serum and HA Antioxidant Moisturizer which can be purchased over the phone.

Are There Any Risks?

Any new product has the potential to cause an allergic reaction. When adding a new product into your skincare routine, always remember to patch test.

If I Buy Plexaderm and Don’t Like It, Can I Return It?

According to the company website, all Plexaderm products can be used for 30 days risk-free. If you do not see or feel the results that you expected, call our Customer Service department within 30 days of your order to return any product (used or unused) for a full product refund less the cost of shipping and processing. The 30-day risk-free guarantee applies to the first month’s supply.

What Else Can I Do About Puffy Eyes?

Puffy eyes and dark circles are frustrating and can be chalked up to a wide variety of factors, including sleep, salty foods and stress. But there are ways to reduce their appearance, ranging from home remedies to the right eye cream. While a tube of eye cream cannot replace a good night’s sleep, applying chilled items such as tea bags, ice cubes or cucumbers can help de-puff eyes. An antihistamine can help if the puffiness is caused by allergies.

The right cream can also make a difference. Look for de-puffing ingredients such as caffeine, green tea extract or antioxidants like vitamin C. These ingredients work to constrict blood flow to the area, which results in a reduction of swelling. For an added dose of de-puffing, store your eye cream in the fridge which will also have a cooling effect.

The philosophy of Formulyst is long-term and effective skincare, rather than covering up any imperfections. The comprehensive line of products tackles everything from wrinkles to dark spots and dry skin. While some brands rely on unnecessary fillers and scents, Formulyst focuses on ingredients that help create results, such as vitamins, minerals and antioxidants. Many of the Formulyst’s products harness the power of plant and citrus extracts as well as gold-standard workhorses such as retinol.

The Advanced Dermatology skin care regimen addresses the most pressing aging concerns. It can be used by men and women in their 20s, 30s, 40s, 50s, 60s and beyond. This award-winning system can help diminish wrinkle appearance, reduce dark spots and hyperpigmentation, fade away redness, even out skin tone and improve the appearance of eye bags and dark circles. Some of the standout products in this line include the Super Youth Serum, Complete Age Defense and Anti-Wrinkle Firming Night Treatment.

The Best Skincare Products of 2019