What Is Acetyl Hexapeptide 8?

Acetyl hexapeptide 8, which is also known as Argireline, is a peptide used in skincare products to reduce the appearance of wrinkles brought on by repeated facial expressions. When it comes to fine lines and wrinkles on the face, especially around the eyes and mouth; they usually form because of repeated facial expressions, such as smiling, frowning, or furrowing the brow in deep concentration or frustration. When people make these expressions, the face contorts based on the contraction of the muscles beneath the skin. Acetyl hexapeptide 8 is designed to temporarily reduce the appearance of wrinkles by intercepting messages from the brain, thereby preventing muscle contractions, similar to Botox.

The main things to know when looking for a product with Argireline is that there is only one formulating lab in Spain that has the patent to produce this ingredient and that, like most skincare ingredients, no two products are created equal. Argireline can come in a number of size peptides and this will dictate the ability to penetrate the skin. The other thing to consider is the other ingredients in the formulation. The other ingredients in the formulation will determine how well this product will work for you. It is best to look for a formulation that has a humectant like hyaluronic acid and an occlusive ingredient, an ingredient that will help keep the moisture in. 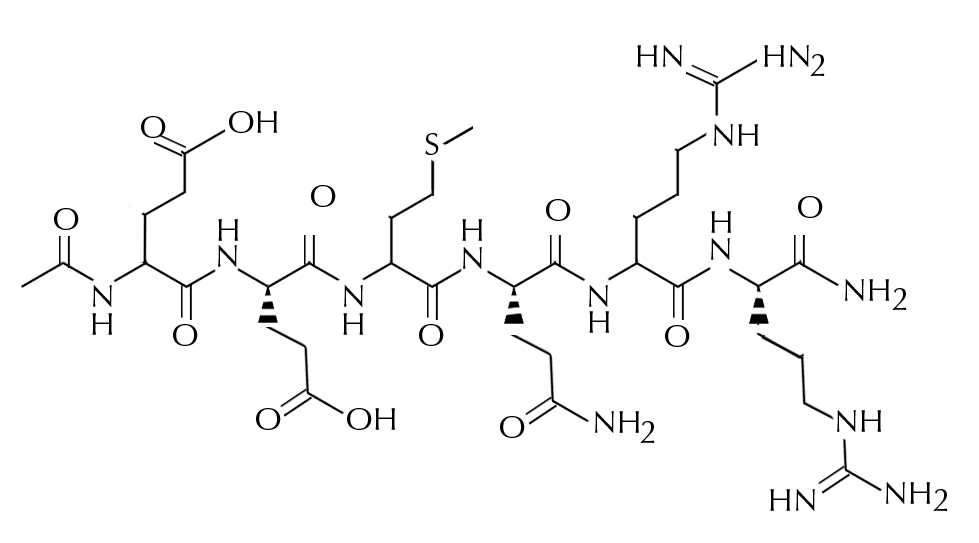 the good: Acetyl hexapeptide 8 or Argireline helps to prevent muscle movement that is responsible for wrinkles, it is thought to improve hydration and may be involved in collagen stimulation.

the not so good:Like any skincare ingredient you can be allergic to Argireline but it is rare. If you have sensitive skin it may be worth doing a test patch first.

Synergetic ingredients:Works well with most ingredients. It is often combined with humectants such as hyaluronic acid to improve hydration.

Keep an eye on:  Try to avoid formulations that contain alcohol as this will dry the skin which can make visible lines more apparent.

What Are the Benefits of Acetyl Hexapeptide 8?

If you are otherwise healthy and don’t suffer from sagging skin, then there are several different ways that acetyl hexapeptide 8 can benefit you.

Collagen stimulation
Argireline may have the potential to help stimulate the production of collagen in the skin. Collagen production reduces as we age and is responsible for the elasticity and firmness in the skin.

Moisture
The hydrating abilities of Argireline is proposed to come from its collagen stimulating capability. Dehydration is a sign of aging, the skin loses its ability to produce hyaluronic acid as we age which is a molecule in the skin responsible for holding moisture in the skin. Exfoliation and the use of occlusive moisturizers can help to keep water in the skin but the use of a humectant such as hyaluronic acid or an ingredient such as Argireline can help to draw the moisture into the skin.

Dynamic wrinkle formation
This is the main effect of Argireline. It works by inhibiting a receptor that is in part responsible for muscle movements, reducing the ability of the muscles to contract. This reduces the underlying cause of fines line and wrinkles, reducing their appearance.

Application of anti aging serums and creams can also be done at home and requires no appointments with a dermatologist or time away from a busy schedule. If you’re using a product that contains the peptide and are not doing so under the care of a doctor, you should watch closely for the development of side effects, as the ingredient doesn’t just work on the surface of the skin, but affects neurological impulses.

Who Should Avoid the Use of Acetyl Hexapeptide 8?

While acetyl hexapeptide 8 has been proven to prevent the formation of wrinkles that are caused by frowning and smiling, there are people who should avoid using this peptide because of the way it blocks impulses to the muscles of the face. For example, if you have drooping eyelids or sagging skin around the eyes, then the use of acetyl hexapeptide 8 may worsen this problem. If you experience regular muscular twitching in the face such as ticks, then you may first want to speak to your physician about using anti-aging products that contain acetyl hexapeptide 8.

Acetyl hexapeptide 8, is not known to produce many side effects. However, those who have sensitive skin may experience stinging upon application, redness, and dry flaky skin on face at the treatment site. Avoid applying products that contain the peptide to irritated, sensitized or sunburned skin. While this ingredient is considered to be safe there is the potential for it to travel through the bloodstream and generate muscle weakness. This is the case with any muscle relaxing peptide such as Syn-ake. If you experience a strong negative reaction to acetyl hexapeptide 8, then you should discontinue its use and consult your dermatologist or skin care expert.