What is Liquid Paraffin?

Liquid paraffin, also known as paraffinum liquidum, is a very highly refined mineral oil used in cosmetics and medicine. Mineral oil is a clear, odorless oil derived from a mineral source, typically a distillate of petroleum. It is the by-product of refining crude oil to make gasoline and other petroleum products. Petroleum is a naturally-occurring liquid derived from the earth, and once it’s purified to become liquid paraffin, it has no resemblance to the original petroleum.

Mineral oil can be used for a variety of purposes, including as a laxative, in food preparation, and mechanical, electrical, and industrial applications. However, liquid paraffin is a term reserved for highly refined mineral oil that is suitable for skin care products, cosmetics, pharmaceutical applications, and even for oral ingestion. This is an important distinction, because some skin care experts who express concern about liquid paraffin may be inadvertently referring to non-medical grade mineral oil, which has not been properly purified for use in skin products.

Finding liquid paraffin listed as one of the ingredients in a cream or lotion can be confusing for some consumers. After all, paraffin is a term that’s commonly associated with candles, which don’t really have anything to do with skin care. But if you take a look at some of your personal care products, you may find liquid paraffin in creams, lotions, lip balm, soap, and even eczema ointments. But what does liquid paraffin do, and more importantly, is it safe to use on the skin? To better understand this ingredient, let’s take a deeper look at its role in skin care.

When it comes to skin care, liquid paraffin can be used to help with several different conditions, such as dry skin, itching, and eczema.

Liquid paraffin can be classified as an occlusive emollient because it forms a film on the skin that acts as a water resistant barrier. The film also helps to prevent evaporation of the skin’s natural moisture. Over time, this increases skin hydration by causing buildup of water in the stratum corneum (the uppermost layer of skin). While all skin types can benefit from emollients like liquid paraffin, emollients are especially helpful for those who have dry, rough, and/or flaky skin. Emollients can alleviate these symptoms, leaving the skin looking and feeling soft and smooth.

In addition to keeping skin moisturized, liquid paraffin helps with skin itching because the occlusive film it forms on the skin’s surface protects against environmental irritants, such as allergens, toxins, bacteria, etc.

Eczema, or dermatitis, is a term that refers to a group of skin conditions characterized by a dry, itchy rash. Eczema can be a debilitating disease due to the extreme pruritus (itching) that the rash can cause. Since liquid paraffin helps to lock in moisture and helps to prevent skin itching, this ingredient is also a common addition to eczema creams. By fortifying the natural moisture barrier, liquid paraffin may be able to reduce symptoms of this skin condition. Those with eczema may want to use products containing liquid paraffin even after the skin has improved to prevent future skin issues.

Is paraffin safe for skin?

Then there is liquid paraffin’s association with petroleum. Many believe that liquid paraffin is contaminated with 1,4-dioxane during the purification process, which has been listed by the World Health Organization and the Environmental Protection Agency as a probable carcinogen. However, as established by the Food and Drug Administration and the international pharmacopoeia, liquid paraffin must go through numerous tests before being incorporated into the formulation of cosmetics and skin care products. It must be 99% pure and entirely free from chemical contaminants, bacteria, and traces of heavy metals. Furthermore, according to EWG’s Skin Deep Cosmetic Database, paraffin is scored as a 1, which is the safest score an ingredient can receive.

The final incrimination used against liquid paraffin is that it can clog pores and promote the development of comedonal acne. Unfortunately, the research on this topic is still inconclusive. Liquid paraffin and mineral oil can exacerbate acne problems for some. However, most people will not experience any problems. In fact, in a study published in the Journal of Cosmetic Dermatology, cosmetic grade mineral oil was found to be non-comedogenic (meaning it doesn’t clog pores, which can lead to blackheads and acne). If you have a history of severe acne, you may want to avoid skin care products with liquid paraffin, as a precaution.

There are many products on the market that contain liquid paraffin, primarily in creams and lotions formulated for those with dry skin. We already mentioned that liquid paraffin is often used in eczema creams, but you may also find it in diaper rash creams, body lotion, makeup remover, lip care products, and more. 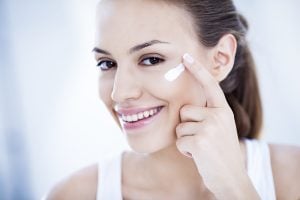