What Is Sodium Sulfite?

Sodium sulfite is a sodium salt of sulfurous acid with the chemical formula Na2SO3. It can be prepared by reacting sulfur dioxide, soda ash or sodium carbonate, and water. The product of this reaction is sodium bisulfite, which is then treated with excess soda ash to obtain sodium sulfite. Sodium sulfite is a white powder with no odor and a slightly salty taste.

In addition, to use in the cosmetic industry, sodium sulfite is used as a food preservative to prevent dried fruit from discoloring and for preserving meats. However, sodium sulfite degrades both vitamins B1 and E, which means that it cannot be added to foods that contain these vitamins. Sodium sulfite is an essential ingredient in the pulp and paper industry. 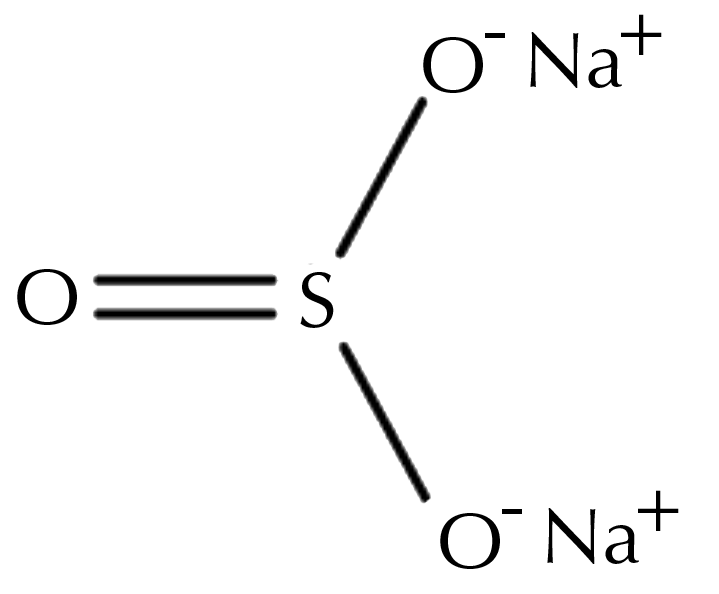 the good:Sodium Sulfite preserves formulations, preventing contamination by the environment and use.

the not so good:It can cause some irritation and allergy that has been linked to sodium sulfite in some skin types, particularly sensitive skin.

Keep an eye on: If you have sensitive skin it may be best to test products containing sodium sulfite before use.

What Are The Benefits of Sodium Sulfite?

In cosmetics and personal care products, sodium sulfite functions as an antioxidant preservative and a hair-waving/straightening agent.

Antioxidant
As an antioxidant preservative, sodium sulfite works by protecting the other ingredients in a formulation from oxidation. Oxidation is naturally occurring process that happens when some ingredients are exposed to air. Oxidation results in destabilization of ingredients and can result in rancidity, changes in color and changes in texture. Adding an antioxidant preservative like sodium sulfite will make the product less susceptible to degradation when exposed to environmental elements.

Hair
In addition to use as an antioxidant preservative, sodium sulfite functions as a hair-waving/straightening agent. It is often used in combination with sodium metabisulfite and sodium sulfate in products used to straighten the hair and in permanent waves. Other hair care products that use sodium sulfite include hair bleaches, hair dyes, colors and tints.

The safety of sodium sulfite has been assessed by the Cosmetic Ingredient Review Expert Panel. It was noted that the highly charged nature of this ingredient results in relatively low penetration into the skin, reducing any risk of irritation or toxicity. After evaluating the scientific data, the Expert Panel concluded that sodium sulfite was safe as used in cosmetics and personal care products.

The United States Food and Drug Administration includes sodium sulfite on its list of substances considered Generally Recognized As Safe (GRAS) for use as chemical preservatives in food. It is not to be used in foods recognized as sources of vitamin B1, or on raw fruits and vegetables. Sodium sulfite must be clearly labeled on the food packaging because some people are sensitive to sulfites.

Despite the approval of sodium sulfite by the Expert Panel, it should be noted that a significant number of people are allergic to sodium sulfite. It can also be an irritant to the skin, eyes, and respiratory tract. With the low level of sodium sulfite used in cosmetics and personal care products, however, it poses little threat to a person’s health.