What Is Sodium PCA?

Sodium PCA is derived from naturally occurring ingredients such as plants, fruits, and oils. Sodium PCA is the sodium salt form of pyroglutamic acid; also known as the amino acid Proline. Amino acids form the base of all proteins. The salt form of the molecule allows it to be water-soluble or able to dissolve in water.  It is generally used for its emollient and hydrating properties.

PCA is found in all living cells and can be extracted from ingredients such as coconut oil and seaweeds for use in skincare products. This is why you will often see sodium PCA in hydrating serums and in cleansers to help retain the moisture in the skin during cleansing. While most of the sodium PCA used is synthetically created, it can also be extracted from these plant-based sources and fermented to create a plant-derived form of the ingredient.

Additionally, PCA is created through the breakdown of the protein filaggrin within corneocytes. Corneocytes are dead skin cells that make up the outermost layer of skin. This layer serves as a protective barrier, preventing moisture loss and reducing the effects of bacteria overgrowth and allergens. Sodium PCA forms about 12% of the skin’s natural moisturizing factor or NMF. The NMF consists of several components such as amino acids, lactic acid, sugar and small proteins. Together with the naturally occurring lipids in the skin, the NMF components work to keep the skin’s surface healthy and looking supple and hydrated. 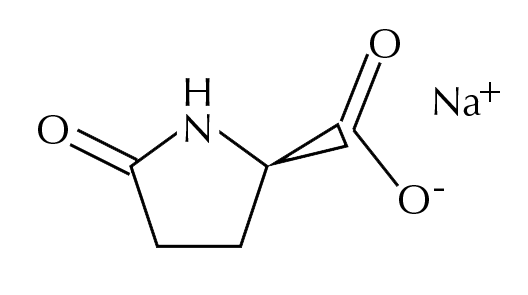 the good: Sodium PCA may help the skin to retain moisture and give your skin the appearance of hydration and reduced flakiness.

the not so good: Nothing to watch out for with this ingredient, it is excellent for most skin types and even concentrations of up to 40% do not irritate the skin.

What Are The Benefits of Sodium PCA?

Sodium PCA primarily functions as a moisturizer in skin and hair care products, including gels, creams, lotions, shampoos, conditioners, lipsticks, and foundations. It is typically used in a concentration range of 0.2 to 40%. Sodium PCA doesn’t irritate except in very rare cases and as such, can be used in a broad range of concentrations.

As a humectant sodium PCA draws moisturize to the skin where it becomes contained in the top layers of the skin. The structure allows humectants to attract and retain the moisture from the air via absorption, drawing the water vapour into as well as from the body. Humectants are often recommended to help maintain or improve the appearance conditions that disrupt the skin barrier such as eczema or dermatitis. The skin barrier consists of the top layers of the skin, including the oils and natural moisturizing factors. The skin barrier helps to protect the skin from bacterial overgrowth, allergens and moisture loss. Research suggests that when the skin’s natural barrier breaks down, it can contribute to skin disorders such as eczema and dermatitis.

PCA is a natural component of the skin’s natural moisturizing factors (NMF). Therefore, topically applied sodium PCA can mimic the benefits that NMF provides. Restoring the skin’s NMF is essential as it depletes with age and from routine exposure to sensitizing ingredients like drying cleansing agents and some alcohol products. This can leave the skin visibly dry, tight-feeling and flaky. By using ingredients that help to replenish NMF, the visible signs of aging such as lines, wrinkles, and dry skin, may be reduced. This leaves the skin appearing smoother, hydrated, and firm. Sodium PCA is non-comedogenic, which means it will not cause the pores to become clogged or worsen acne.

Sodium PCA is also used in hair care products. It is known to enhance the appearance and feel of hair, by increasing hair body, suppleness, or sheen, or by improving the appearance of hair that has been damaged physically or by chemical treatment.

The safety of PCA and sodium PCA has been assessed by the Cosmetic Ingredient Review Expert Panel and found to be safe for use in cosmetics and personal care products. Through the research conducted evidence suggests that sodium PCA are non-sensitizing; they don’t irritate the skin. In a range of clinical tests, PCA and sodium PCA were found to be non-irritating and non-sensitizing, with and without UV exposure. Topically applied sodium PCA has low skin penetration, which means it doesn’t get absorbed readily or deeply into the skin. This means that toxicity data was not critical to the completion of the safety assessment.

However, sodium PCA should not be used in cosmetic products containing nitrosating agents. This is because in the presence of certain chemicals and heat and light, sodium PCA can break down and create carcinogenic nitrosamines. This is regulated in product formulation as well as in packaging choices.