What Is Sodium Hyaluronate?

Sodium hyaluronate is the water-soluble sodium salt form of hyaluronic acid. Hyaluronic acid is a naturally occurring polysaccharide or carbohydrate that is found in various connective tissues of humans.

Hyaluronic acid has a unique capacity for retaining water; it can hold up to 1000 its weight in water. It is found in nerves, joints, hair, eyes, and skin, acting as a lubricant and hydrator. Skincare products that contain sodium hyaluronate can efficiently hydrate the skin while giving you a smoother, plumped complexion.

Hyaluronic acid binds to water molecules and draws water into the cells, working as a powerful water-based hydrating ingredient. This is possible because sodium hyaluronate is a glycosaminoglycan, a long polysaccharide or sugar molecule composed of disaccharides called amino sugars and uronic acid.

Glycosaminoglycan is negatively charged and thus tends to attract positively charged sodium and potassium ions. In turn, this causes the glycosaminoglycan to absorb and hold a large amount of water. It is for this reason that sodium hyaluronate is used in skincare formulations to improve the appearance of dehydrated or lackluster skin.

Sodium hyaluronate is essential, particularly as we age. One-third of the hyaluronic in our bodies is exhausted and replenished each day.  This process begins to become less efficient as we grow older, and the hyaluronic acid levels in the skin begin to decrease.

According to the journal Dermato- Endocrinology, the most dramatic histochemical change observed in aging skin is the marked disappearance of sodium hyaluronate in the top layer of skin. This is part of the reason why our skin becomes drier and less firm after we hit our mid to late 20s. Of course, this varies for different skin types and ethnicities, but you will be able to gauge this change when your skin begins to feel drier. It is crucial not to measure this change based on oil changes in the skin as a reduction in hyaluronic can cause the skin to overproduce oil to compensate for the lack of water-based moisture. 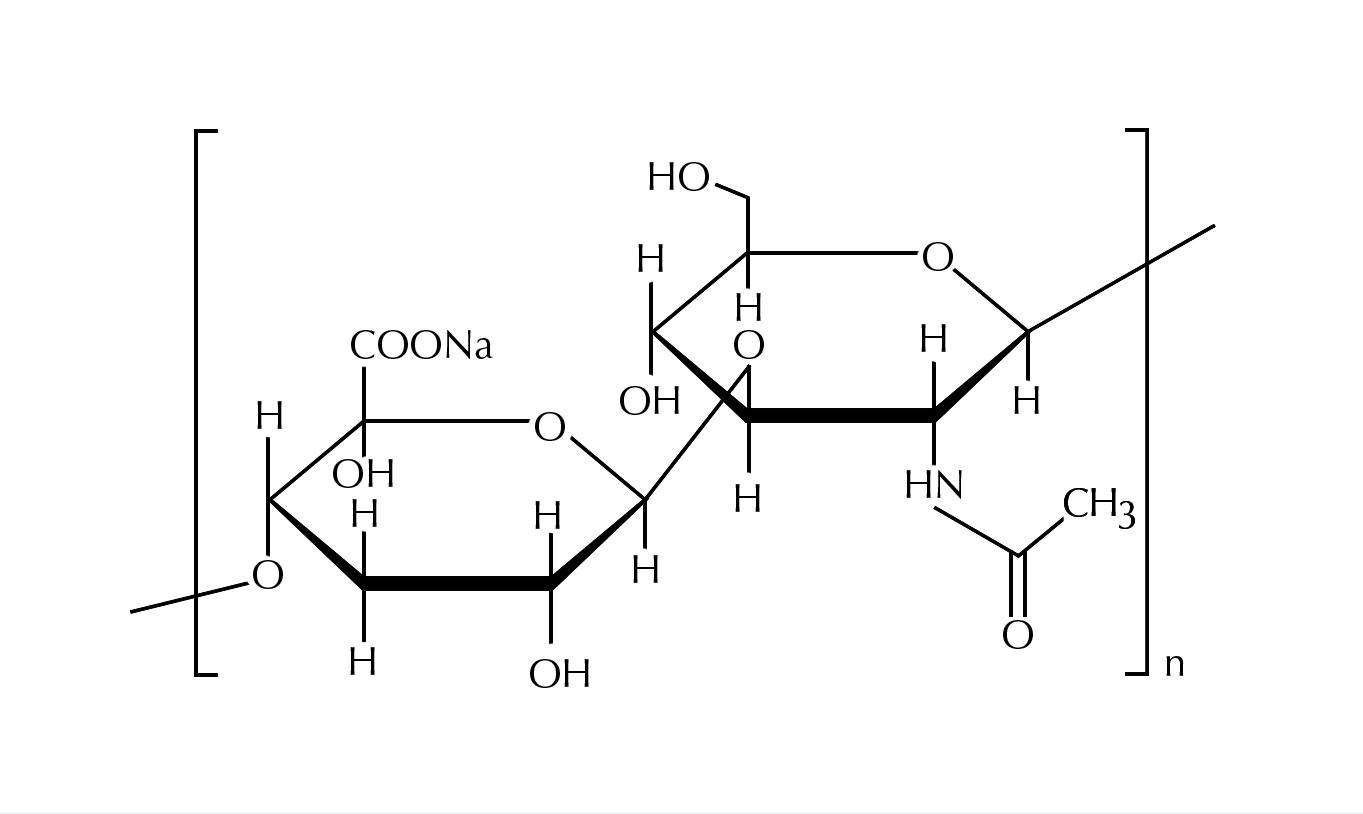 the good: Provides water-based moisture to the skin, reduces the appearance of fine lines and wrinkles, helps wound healing, and hydrates cells.

the not so good: Needs to be sealed in with a moisturizer or oil to retain moisture.

Synergetic ingredients: Works well with most ingredients but especially in serum form with vitamin C, B, and acids.

What Are the Benefits of Sodium Hyaluronate?

Sodium hyaluronate helps to replenish the skin’s moisture content, hydrating the skin’s cells, and giving you that plump, dewy look.

Sodium hyaluronate also helps to improve the appearance of fine lines and wrinkles by addressing one of the main signs of aging; visible loss of fullness. As we age, our body loses the ability to produce its hyaluronic acid.

By replenishing it through serums and supplementation, we can improve the appearance of the skin, hydrating the cells, and reducing the visible lines. Giving the skin back the moisture, it has lost with time, helps to firm the skin and reduce the appearance of wrinkles.

Sodium hyaluronate comes in a gel formulation that allows it to be slotted into your skincare routine without adding any unnecessary heaviness. This is great for congestive skin types that need to be wary of introducing heavy or clogging ingredients as it adds hydration without the thickness.

Sodium hyaluronate is an excellent addition for oily, combination, or congested skin as it adds hydration without the heaviness. Sodium hyaluronate may also help to reduce the overproduction of sebum, which can occur when the skin is dehydrated as an attempt to compensate for the lack of moisture.

Sensitive skin types often benefit from the use of sodium hyaluronate as it is a non-irritating ingredient. Sodium hyaluronate doesn’t cause any sensitizing issues and may help the skin to calm itself during irritated moments.

Sodium hyaluronate is also used in fillers, think lip and cheek fillers. It is mainly used as it is recognized by the body as something the body already contains, hyaluronic acid. This reduces the likelihood of irritation and reaction from the body’s immune system.

As of 2017, the US Food and Drug Administrtaion or FDA had approved 13 hyaluronate preparations that are known as dermal fillers. They are also used as a filler of lips or in other parts of the body, though not FDA approved. The filling effect is temporary and lasts for about six months or longer in most people.

Do Size and Concentration Really Matter?

Yes! In the case of sodium hyaluronate and hyaluronic acid size and concentration really does matter.

The size of the molecule that is used in formulations is important to the level of penetration it can achieve. If a molecule is too large, it isn’t able to be absorbed into the skin. A small molecular weight is important to get the benefits of the sodium hyaluronate. Sodium hyaluronate is a small molecule able to penetrate deeply into the skin, whereas hyaluronic acid has large molecular weight and tends to sit on top of the skin. While hyaluronic acid will still improve the appearance of the skin by pulling moisture to the surface, it does not have the same hydrating effect as sodium hyaluronate that hydrates the deeper layer of the skin, giving it that hydrated plumped look.

Concentration is a critical element to consider with sodium hyaluronate. Products are often advertised to be pure hyaluronic or 100% in sodium hyaluronate. In reality, the highest concentration that you can create without creating dryness is 2%. Dehydration can occur with higher strength serums as they can pull all the moisture to the surface of the skin where it is lost to the air. The industry standard is 1%. The formulations that claim to be higher in concentration than this tend to be mostly water.

There are no known side effects to sodium hyaluronate; it is considered to be a non-irritating, non-toxic ingredient, beneficial for all skin types. A 2009 safety report published in the International Journal of Toxicology concludes that hyaluronic acid and its sodium and potassium salts are considered safe for use in cosmetics as skin conditioning agents at concentrations up to 2%. Sodium hyaluronate is also able to be ingested as a supplement.

While irritation and sensitivity are rare, it can occur with some linking sensitivity to the small molecular weight of sodium hyaluronate. If you experience irritation, stop using the product and consult your dermatologist.

Water-based hydration is what sodium hyaluronate provides to the skin, water. It helps to pull water into the skin. Water is necessary for all cells in the body and is especially important for the skin as the skin contains 50% of the body’s hyaluronic acid.

Oil-based hydration is what the body naturally produces through sebum. When the skin is not producing enough oil, which can occur as we age, through hormone imbalances or environmental factors, the skin requires extra oil to help balance out the skin. Sebum and oils help to prevent moisture or water loss from the top layer of the skin, helping to maintain a healthy skin barrier.

How Do You Use Sodium Hyaluronate?

Most sodium hyaluronate products come in serum form. This form makes it easy to bring into an existing skincare regime. The most important thing to remember when using a hyaluronic product is that it needs to be sealed into the skin. If you just use a hyaluronic serum, it will draw moisture to the skin only to be lost to the air. Using a moisturizer or oil over the top will help to seal in the water-based moisture that the serum has created at the surface layers of the skin.

The other important element to getting the most out of your sodium hyaluronate product is to drink water. As sodium hyaluronate pulls water from the body to replenish the cells, it is essential to provide the body with that water. Keeping hydrated will also help replenish the naturally occurring hyaluronic acid in the skin. This is why when you are dehydrated, your skin looks lackluster and dry.