What Is Sodium Benzoate?

Sodium benzoate is the sodium salt of benzoic acid. Both benzoic acid and sodium benzoate occur naturally in many foods. As Healthline discussed in their article sodium benzoate can be found in fruits and vegetables can be rich sources, particularly cranberries, prunes, plums, cinnamon, ripe cloves, and apples. Other sources include seafood and dairy products like milk, cheese, and yogurt. While the two components of sodium benzoate are present in naturally occurring sources, it is almost always synthetically produced.

Sodium benzoate is a white, crystalline solid that dissolves in water, forming a transparent, colorless solution. This ingredient is primarily used as a preservative in food and cosmetic products. In fact, sodium benzoate was the first preservative allowed by the FDA for use in food products. 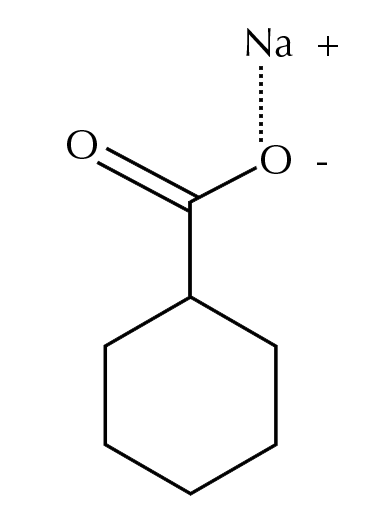 the good:Sodium benzoate is an effective preservative that prevents the growth of molds and bacteria in skincare and cosmetic formulations.

the not so good:May interact with vitamin C in formulations.

Keep an eye on:Keep an eye out for further research into the effect of sodium benzoate on free radicals.

Why Is Sodium Benzoate Used?

Sodium benzoate functions as a preservative in cosmetics and skincare products.

Preservative
As a preservative, sodium benzoate prevents bacteria and fungi from growing in products. The mechanism starts with the absorption of benzoic acid into the cell of a microorganism. If the pH inside the cell falls to 5 or lower, the anaerobic fermentation of glucose through an enzyme called phosphofructokinase decreases sharply. This inhibits the growth and survival of microorganisms that can cause products to spoil.

Sodium benzoate also functions as a corrosion inhibitor, which means it helps to prevent the corrosion or production of rust of metallic materials used in cosmetic packaging.

One potential problem with sodium benzoate occurs when it is formulated with vitamin C. When sodium benzoate is combined with vitamin C, a chemical reaction occurs that forms benzene. Benzene has been identified as a carcinogen or cancer-causing ingredient. According to a publication in the International Journal of Occupational and Environmental Health, benzene-induced cancer in humans was first reported in the late 1920s.

The reaction between sodium benzoate and vitamin C was first discovered in the early 1990s. The major concern about this reaction was mostly focused on the presence of these two ingredients in soft drinks. In fact, 2.5% of 200 soft drinks with vitamin C and sodium benzoate were found to have levels of benzene above allowable levels, according to the US Food and Drug Administration.

So is the presence of sodium benzoate and vitamin C in a skincare product a major concern?
The answer is unclear. This is because there are ways of formulating products that can prevent this reaction from occurring. For instance, benzene does not form at all if you use beauty products with a very high concentration of vitamin C and a low concentration of sodium benzoate. This is because higher amounts of vitamin C cause it to act as a free radical inhibitor instead of reacting with sodium benzoate. In addition, products formulated with a pH of 3 or above are safer than those with a pH of 2 or less. And above a pH of 7, no benzene forms at all. Lastly, protecting products from light or heat exposure can limit the chances of benzene formation. Manufacturers that follow safe practices can effectively prevent benzene in their products.

Free radicals
Aside from the problem with vitamin C, there is also some evidence that suggests sodium benzoate may damage cells on its own. A study conducted at Sheffield University in the UK in the field of molecular biology and biotechnology found that sodium benzoate increases the production of free radicals. Free radicals are highly unstable, reactive species that can damage important cellular components, such as DNA, cell membranes, proteins, etc. In this study, sodium benzoate appeared to attack the mitochondria of cells, damaging their ability to prevent oxygen leaks that create free radicals. It is important to note that research is preliminary, and no human research has been conducted. Further studies will need to be completed to determine if sodium benzoate is a health hazard in this regard.

The US Food and Drug Administration includes sodium benzoate on its list of direct food substances affirmed as Generally Recognized As Safe (GRAS).

Sodium benzoate is a preservative in food, also known as E211. It is used in acidic food products such as dressings, sodas, juices and jams. Its ability to act as a corrosion inhibitor also means that it is used in protecting engines and metals from rust.