Octocrylene: Why Octocrylene Used In Sunscreen? - The Dermatology Review

Octocrylene is an ingredient used in sunscreens for its ability to absorb UV rays, protecting the skin from sun damage. Octocrylene is a thick colorless ingredient; it is very chemically stable and can be used as an additive to cosmetics to preserve any natural chemical degradation that can occur when skincare products are exposed to sunlight for prolonged periods.

Octocrylene is classed as a chemical sunscreen due to this ability to protect the skin from UV damage. Octocrylene is different from your physical based sunscreens such as; zinc or titanium dioxide which work to protect the skin by creating a physical barrier. Octocrylene is also thought to have skin-moisturizing effects because of its emollient properties. Emollients help to prevent moisture loss from the top layers of the skin. However, it’s important to remember that the primary purpose of this ingredient is to neutralize UV radiation, and any emollient properties are just an added benefit. If you’re looking to moisturize the skin specifically, octocrylene should not be the first ingredient on your list. Octocrylene is often used in formulations for products such as; hair sprays, tanning oils, BB creams, conditioners, and CC creams.

The Food and Drug Administration (FDA) has evaluated the safety of octocrylene in its use in sunscreen products and found it to be safe for concentrations up to 10%. The Cosmetic Ingredient Review Expert Panel, a group that reviews the safety of skincare and personal care products, has deferred its review of octocrylene due to the extensive safety assessment conducted by the FDA. Octocrylene is also considered safe for use in concentrations up to 10% under EU Cosmetic Regulation. The EU is often considered to be stricter in their approval of ingredients. 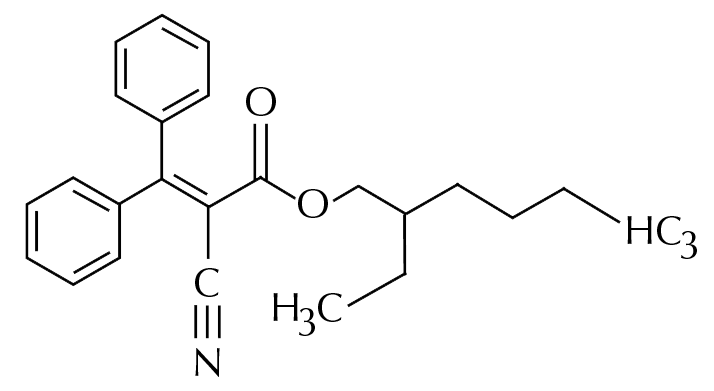 the good: Effectively absorbs UV rays to protect the skin from the damage caused by the sun.

the not so good: Octocrylene has been linked to some allergic reactions; however, they are extremely rare.

Who is it for? All skin types excluding those who have a specific allergy to the ingredient.

Synergetic ingredients: All skin types excluding those who have a specific allergy to the ingredient.

Keep an eye on: Make sure always to reapply sunscreen every two hours when you’re exposed to the sun as the chemical sunscreens will reduce in effectiveness over time. Their protective abilities are also reduced by sweat and water.

There are two categories of sunscreens on the market, physical, and chemical. Octocrylene falls into the chemical-based sunscreen category. However, it is essential to understand the difference when determining which product is for you.

Physical sunscreens work by reflecting the UV rays from the sun, protecting the skin from the harmful rays. These formulations rely on the use of ingredients such as zinc oxide and titanium dioxide to provide this protection. Physical sunscreens create a barrier between the skin and the sun and aren’t absorbed into the skin. They are generally broad-spectrum, meaning that they protect against both UVA and UVB rays.

The short answer, yes. The longer answer, also yes, but keep reading. Given the controversy around chemical sunscreens, the FDA has invested resources into determining their safety. The FDA has found octocrylene to be safe in concentrations up to 10%.

The regulation of octocrylene is important as chemical sunscreens are absorbed into the skin. The majority of studies suggest the absorption of the ingredient into the bloodstream is not significant to cause any harm, when used at the concentration approved by the FDA. However, a study published by Frontiers in Medicine, noted that there had been some research suggesting that chemical sunscreens may be absorbed into the bloodstream at a higher rate than previous studies have indicated. It is important to note that this is not the scientific consensus, and the relevant regulatory bodies will review new information as it becomes available.

The potential issue with octocrylene being absorbed into the bloodstream is that it may disrupt hormones in the body. While this may seem scary, it is unlikely that the amount of sunscreen used over a lifetime would add up to a significant enough dose to disrupt hormones. An article by Harvard Health estimates that it would take 277 years of sunscreen use to create a substantial disruption.  If you are concerned about the potential effects of octocrylene, speak with your dermatologist and your physician, especially if you are pregnant.

Does Octocrylene Protect Against UVA and UVB?

What Else Does Octocrylene Do?

Another useful chemical property of octocrylene is its ability to easily combine with other oils, which makes it helpful as an emulsifier – used to keep ingredients more thoroughly mixed to improve their effectiveness. In-vitro studies have shown that sunscreen combinations containing octocrylene may increase UVA protection levels without causing instability or significantly harming the skin and boosting the sun protection factor (SPF).