Should You Be Avoiding Disodium Laureth Sulfosuccinate?

What Is Disodium Laureth Sulfosuccinate?

DLS is a common ingredient in shampoos, cleansers, and body washes. This is mainly due to its ability to lift oils and dirt from the skin, allowing them to be easily rinsed away. DLS also helps to improve the foaming of the product and helps to stabilize the product.

DLS is not considered a sulfate, while the name may seem similar to sulfates such as sodium lauryl sulfate, it is considered to be far gentler on the skin and non-irritating. 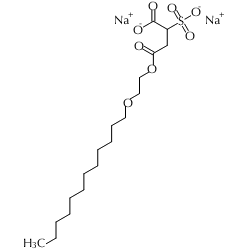 the good: DLS is a surfactant, meaning that it helps to cleanse the skin, remove dirt and lift oils so that they can be washed away.

Why Is Disodium Laureth Sulfosuccinate Used?

Disodium laureth sulfosuccinate is a surfactant. Surfactants lower the surface tension between two liquids or solids. This allows for oils and dirt to be lifted from the skin and be easily washed away from the skin. This is why DLS is primarily used in cleansers, soaps, bubble bath products, shampoos, and shaving creams.

DLS is considered to be gentler on the skin. This is due to the molecule size, other surfactants have smaller molecule sizes while DLS has a larger molecule size comparatively. This means that DLS doesn’t readily penetrate the skin where it is likely to cause irritation. It also is a negatively charged molecule, contributing to its milder nature.

You will often find DLS in products that claim to be sulfate-free. Sulfate-free products have become popular with the rise of clean beauty and are often favored as they can be less irritating. However, without sulfates, cleansers and washes need to use a different surfactant in order for them to be effective at cleansing. This can mean that a harsher surfactant than sulfates is used in order to still fit the label of ‘sulfate-free’. This is where DLS is a good option as it is not considered a sulfate, yet is still a milder option when formulating a sulfate-free product.

The safety of DLS has been reviewed by the Cosmetic Ingredient Review Expert Panel, a group responsible for evaluating the safety and efficacy of skincare and cosmetic ingredients.

The Expert Panel indicated that DLS is considered to be safe in its current uses and concentrations when formulated to be non-irritating. Based on its high molecular weight and negative charge it doesn’t penetrate the skin, posing little risk to health. The Expert Panel also determined that DLS is not considered to be a sensitizer, however, can be irritating to the skin and eyes particularly if the product isn’t formulated with minimizing irritation.