If you have ever taken a deep dive into researching how to get rid of under eye bags and wrinkles,  you’ve probably come across articles touting Preparation H as an option. This may have left you scratching your head, as the cream is meant to be used to ease the symptoms of hemorrhoids. How did Preparation H become linked to eye wrinkles, how (and why) do people think it works- and is it worth a try?

What is Preparation H?

Preparation H is a cream designed to help temporarily soothe the symptoms of hemorrhoids. According to the company, “It temporarily shrinks swollen hemorrhoidal tissue and provides prompt, soothing relief from painful burning, itching and discomfort.” There are a few different versions of Preparation H, and the classic ointment contains mineral oil and petrolatum, but the key ingredient is phenylephrine HC, a vasoconstrictor which helps to temporarily restrict blood vessels. Other versions include a Cooling Gel with aloe vera; an Anti-Itch cream with hydrocortisone; a Rapid Relief version with lydocaine and a Multisymptom Pain Relief version with vitamin E, panthenol and aloe vera. 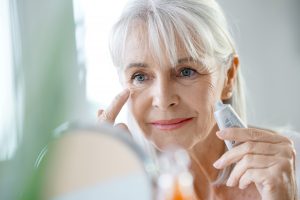 Preparation H started out as a remedy for sunburn decades ago, and the product is now owned by Pfizer.

Why Do People Use Preparation H on the Eye Area?

When you research how to fix puffy eyes and wrinkles, you’ll come across articles where makeup artists call Preparation H their “secret weapon,” and find plenty of blogs and vlogs touting its benefits. Kim Kardashian’s makeup artist Mario Dedivanovic has said he used Preparation H under the eyes. According to People magazine, in Dedivanovic’s 2017 makeup Master Class tutorial he said, “It Tightens the skin. That’s a really old, old trick. It smells really bad but it works.” Dedivanovic recommended applying it before concealer.

People assume that because the cream helps to temporarily restrict blood vessels in the rectal area, it must do the same thing for the eye area. Fans point to the addition of hydrocortisone, an anti-inflammatory that in theory might temporarily reduce puffiness.

If you take an even deeper dive into Preparation H history and lore, some people point out that older formulas contained a live yeast-cell derivative (LYCD or LYD), called biodyne. According to Healthline, biodyne helps with wound healing and burns. This yeast was removed from the American version in 1995, but fans of Preparation H for the eye area swear that it is the yeast that helps with under eye bags and wrinkles. The Canadian and some European versions of Preparation H currently have biodyne. The FDA has since banned the use of live yeast cell derivatives in the 1990s. According to the Associated Press in 1993 “the FDA regards it as effective only as a wound-healing agent and said two studies submitted by manufacturers failed to show it is effective in treating hemorrhoids.”

What Else Have People Used Preparation H For?

According to 2008 reports from ABC News and Newsweek, there was a trend of bodybuilders and club goers applying a layer of Preparation H on their bodies, with the intent of looking leaner. The theory is that by constricting blood vessels, excess water is removed from the skin, thereby making the body look slimmer.

Where Can I Buy Preparation H?

Preparation H is widely available at drugstores such as Walmart, Walgreens, CVS and Target as well as supermarkets and Amazon.

How Much Is Preparation H?

What Ingredients are in Preparation H?

Google “does Preparation H work for wrinkles” and you’ll find articles claiming it’s a “beauty pageant secret,” along with Vaseline on teeth and hairspray on bikini bottoms. In 2017 vlogger Sasha Hartleb calls it her “insane, crazy, weird” beauty product. She says she has used it for two months and “it has changed her skin completely.” Hartleb notes that she used a version from Greece, which contains YSD (yeast cell derivative) and shark liver oil. In 2016 vlogger Catiebt called it “great for wrinkles or used as a primer.” There is plenty of praise for Preparation H on Pinterest and it is debated on Reddit, where one user noted “It’s an old wives tail [sic]  that’s sort of been jumbled. Preparation H near the eyes (which I wouldn’t recommend) was a trick for reducing immediate swelling and redness from allergies or crying. It was popular at beauty pageants and stuff. It wouldn’t do anything for everyday eye bags or dark circles..”

While we all yearn for a magical product to instantly depuff eyes and make the eye area look fresh, Preparation H is not the answer.  There are many reasons why.

According to the Mayo Clinic, hydrocortisone can cause a “thinning, weakness, or wasting away of the skin.” In addition, it can cause a “thinning of the skin with easy bruising, especially when used on the face or where the skin folds together (e.g. between the fingers).” Healthline warns that “prolonged use might result in skin that’s thinner, more fragile, red and swollen” and notes that “hemorrhoid creams that contain hydrocortisone can actually worsen some skin problems of the face, including impetigo, rosacea, and acne.” Healthline also points out that since hydrocortisone is a steroid,  and over time “it can affect your adrenal glands. Adrenal glands are responsible for your body’s response to stress.” The bottom line, according to Healthline, is that “There’s not much evidence suggesting that hemorrhoid creams can help reduce your wrinkles. Most claims are anecdotal and only pertain to formulations containing the banned substance LYCD.”

What Else Can I Do About Under Eye Wrinkles and Puffiness?

Tackling under eye wrinkles and puffiness is a multi-prong approach of prevention, figuring out what the root cause is and finding the right products to help improve the look of the eye area.

The skin around the eyes is some of the thinnest on the body, which means that genetics and bad habits show up here first. The sun’s damaging rays, squinting, smoking and rubbing your eyes all contribute to eye wrinkles. How you sleep (on your side or on your back) as well as the material of a pillowcase also play a role as constant creasing of the face can lead to wrinkles.

Environmental factors and lifestyle habits can also be behind puffiness and dark circles. Lack of sleep, allergies, smoking and the sun can all cause under eye circles, while puffy eyes can be chalked up to lack of sleep, hormones and stress. Salty foods and crying also contribute to puffiness, along with alcohol consumption.

Prevention starts with applying a cream with a high SPF around the eye area, and adding more protection by wearing sunglasses and a hat, to prevent squinting.

There many ways to tackle under eye bags, puffiness and wrinkles from home remedies to the right ingredients. Plenty of things can be found right in your kitchen.  Slices of cucumber, chilled tea bags or spoons stored in the freezer can all help to temporarily depuff eyes, as the cold helps constrict blood vessels. Tea bags are packed with caffeine, an antioxidant that can help temporarily shrink under eye bags, so look for green or black teas. Other options include applying chilled aloe vera gel, or flushing out your sinuses using a neti pot or saline spray if you suspect that puffy, baggy eyes are caused by allergies. Jade rollers are an easy way to help manually depuff eyes.

The right eye cream can also help to perk up the eye area. To depuff eyes, look for eye creams containing caffeine as well as vitamins C to lighten and brighten the appearance of the skin. USe an eye cream containing moisturizing ingredients such as hyaluronic acid and squalene to boost moisture levels and soften the look of fine lines.  Retinol, derived from vitamin A, helps to soften the look of fine lines and wrinkles. Try applying an eye mask to give the area some pampering. For an instant improvement in the eye area, apply a hydrating concealer to brighten the eye area.