How to get rid of blackheads - The Dermatology Review

How to get rid of blackheads

Blackheads are the bane of many a person’s skin. They are stubborn and tenacious, refusing to be removed, and even once removed, seem to come back with a vengeance. The battle against blackheads may be a very long one if your skin is prone to them. However, that doesn’t mean there’s nothing you can do about them. There are several different methods of getting rid of them, but you do have to be persistent. Both physical and chemical exfoliation can help, as long as you do them regularly and diligently, and the correct way. Too much exfoliation can actually cause even more blackheads to form, if you’re not careful. In this article, we’ll break down everything you need to know about blackheads and the best ways to get rid of them.

Blackheads are a type of acne known as open comedones. Open comedones occur when a pore, or hair follicle (you have millions of them on your body), becomes clogged with sebum (oil) and dead skin cells, and its exposure to the air turns it a darkened color (it essentially oxidizes). By contrast, whiteheads are clogged pores that are covered by a layer of skin and therefore never exposed to oxygen. Thus, they don’t develop that dark color that gives blackheads its name. It’s important to note that blackheads are not dark because of dirt and grime, but rather because of their exposure to oxygen. You don’t have to feel dirty for having blackheads or feel that your skin is dirty. 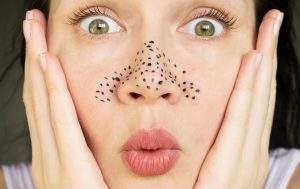 Blackheads typically occur because hormonal changes cause excess oil production in skin. As the skin sheds dead skin cells, some of them become trapped in pores, where they mix in with this excess oil and harden. Suddenly, they are noticeable bumps that stretch out a pore and make it appear bigger than it usually is.

Androgens are the hormones that trigger excess oil production. Both men and women have them. Androgens can both overstimulate oil glands and influence changes in skin cells, which will ultimately lead to the production of blackheads.

Blackheads can appear pretty much anywhere on the body (like the back and chest), but most often will appear on the T-zone. This is the area of the face that comprises the forehead, nose and chin. The nose and chin, in particular, are popular breeding grounds for blackheads because they often have a lot of oil production. Blackheads on the nose and chin can be especially troublesome because they are front and center on your face, where they are more likely to be noticed.

You may be tempted to pick at them, but this will only lead to more irritation and possibly scarring. It’s best to avoid picking at blackheads and instead try out some other, less invasive ways of clearing them.

There are several tried and true methods of blackhead removal. Physical exfoliation and chemical exfoliation are popular options. Meanwhile, retinoids are powerful vitamin A derivatives that are effective against many types of acne.

Physical Exfoliation – Physical, or manual, exfoliation involves using scrubs that contain micro beads or using tools like brushes and techniques like microdermabrasion to physically remove blackheads from inside pores. Scrubs are sold in drugstores and beauty stores and can be used by anyone, as can brushes that are moved in a circular motion along skin to help provoke blackheads to the surface. Microdermabrasion, on the other hand, is best done by a professional in a dermatologist’s office. Microdermabrasion works by using a handheld device that essentially “sands away” bumpy blackheads to make skin smoother. The bumps are then less noticeable and pores become smaller as well.

Sometimes scrubs, if the micro beads are too large or jagged, can cause very small tears in the skin. This can lead to irritation or even infection. It’s best to use scrubs with very small, refined beads that still do the work, but won’t be harsh or tear your skin.

When it comes to facial brushes, these can also sometimes be used too harshly, especially if you press too hard on your skin. Be careful you don’t overdo it when using an exfoliating brush as it can also cause irritation.

A good rule of thumb with exfoliation is to do it regularly but sparingly. You don’t want to exfoliate daily, but you do want to do it about once or twice a week. Too much exfoliation can actually cause more oil to form, because skin often becomes excessively dry when you use too many products on it. This dryness sends your oil glands into overdrive and makes them produce even more oil. As you can foresee, this only makes more blackheads form.

Chemical Exfoliation – Chemical exfoliation involves the use of gentle acids to exfoliate and help “unglue” all the oil and dead skin cells that are stuck together inside pores. Chemical exfoliants help to gently slough off pore-clogging substances to reveal smoother, softer, clearer skin. They’re also good for sensitive skin types because they are less likely to cause excess irritation.

The acids used in chemical exfoliation are usually either alpha hydroxy acids (AHAs) or beta hydroxy acids (BHAs). AHAs include lactic acid and glycolic acid. These two acids can unclog pores, but they are more likely to be used in treating hyperpigmentation, sun damage and fine lines and wrinkles. They are water-soluble acids, meaning they work on the skin’s surface and are typically best for dry to normal skin (because they can increase skin’s moisture content too). BHAs include salicylic acid, a very popular anti-acne ingredient. Salicylic acid is oil-soluble, works on the skin’s surface and inside the pore and is better for combination and oily skin types. Both of these types of acids can be used together, although it’s best not to layer them (this can cause irritation). For example, you can use a BHA in the morning and an AHA in the evening. Or you can apply a BHA to the oilier T-zone and an AHA to the drier cheek area.

Retinoids – Retinoids are vitamin A derivatives used to treat a variety of acne. Retinol is probably the most well known retinoid, and is available over-the-counter. Like the aforementioned acids, it also helps to slough away dead skin cells and clear up clogged pores. It works on certain skin receptors to make skin cells more likely to shed and less likely for hair follicles to get clogged as a result. Irritation can also be common with the use of retinol. Peeling may occur regardless of skin type, but this is usually an adjustment period that lasts about a week or so. Afterwards, your skin will be used to the treatment and be far less likely to exhibit unwanted side effects.

Some dermatologists recommend using a retinoid like retinol in conjunction with an acid like salicylic acid to effectively get rid of blackheads. For this type of treatment, it’s best to use the retinol at night (retinoids increase sensitivity to the sun) and the salicylic acid during the day or in the morning.

Blackheads are extremely annoying and persistent, but also treatable and preventable. The key is to be as persistent as a blackhead itself to slough away those suckers and prevent them from popping back up. Resist the sometimes overwhelming urge to pick at them or pop them. As satisfying as it can be, this will only result in scarring or inflammation, and you definitely don’t want that.

The philosophy of Formulyst is long-term and effective skincare, rather than covering up any imperfections. The comprehensive line of products tackles everything from wrinkles to dark spots and dry skin. While some brands rely on unnecessary fillers and scents, Formulyst focuses on ingredients that help create results, such as vitamins, minerals and antioxidants. Many of the Formulyst’s products harness the power of plant and citrus extracts as well as gold-standard workhorses such as retinol. Read More
2

The Advanced Dermatology skin care regimen addresses the most pressing aging concerns. It can be used by men and women in their 20s, 30s, 40s, 50s, 60s and beyond. This award-winning system can help diminish wrinkle appearance, reduce dark spots and hyperpigmentation, fade away redness, even out skin tone and improve the appearance of eye bags and dark circles. Some of the standout products in this line include the Super Youth Serum, Complete Age Defense and Anti-Wrinkle Firming Night Treatment. Read More